Every year, Catholics come together across Australia to acknowledge and celebrate the gifts of Australia’s First Peoples in the Catholic Church. This year is particularly important following the COVID 19 Pandemic and its impact on the ways in which we interacted and made contact with one another.

For these resources NATSICC has decided to adopt the NAIDOC theme for 2021 – Heal Country. Today our world is in need of healing – environmentally, spiritually and socially. We must all come together as a global community to fight the injustices of inequality, racism and environmental damage.

We hope that these resources will help your community to begin to Heal and in turn aid in the healing of those in most need. Please see below for a number of activities and guides to celebrate our special day in your Parish, school or organisation. 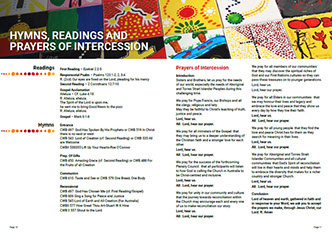 The 24 page, full colour booklet for 2021 has been designed to help Schools, Parishes and organisations celebrate the gifts of First Australian Catholics.

The NATSICC Liturgy team has compiled prayers, Liturgy suggestions, homily notes and statistics that will enhance and enrich your celebration.

Additionally, there is a practical activity that calls for Catholcis around Australia to knit / crochet blankets for the NATSICC Palliative Care package program. 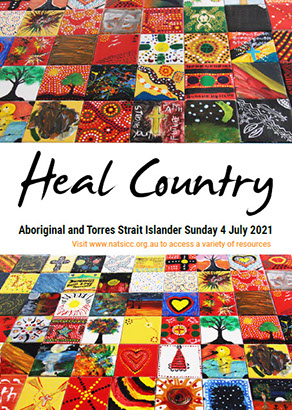 Click on the image (left) to download a high resolution version of the 2021 Aboriginal and Torres Strait Islander Sunday Poster.

The poster design uses tiles that were painted by delegates at the 2018 NATSICC Assembly in Perth. Each tile represents a visual representation of Catholic Faith and Culture working together.

This Acknowledgment of Country and presentation for use in Parishes and Schools will set the scene for your Aboriginal and Torres Strait Islander Sunday Celebrations is currently being prepared. It is suited for Parishes, Schools and Organisations who have been unable to invite a Traditional Custodian to provide a Welcome to Country. You  can either stream the video using the link below, or download to your local machine in readiness for you celebration by clicking here. The file size is 111mb.

As a way of enhancing and enriching your celebrations for Aboriginal and Torres Strait Islander Sunday, NATSICC has engaged with young Catholic, Kuku Yalanji and Yidinji man Luke Stevens to produce a series of Didgeridoo tracks. Luke has used his cultural gifts to explore the theme of this year’s celebration – Heal Country – through the lens of his Catholic Faith in order to produce these wonderfully reflective and inspirational tracks.

The NATSICC Liturgy Resource for Aboriginal and Torres Strait Islander Sunday makes suggestions of hymns that could be used for the Entrance and Communion parts of the Mass replacing the Entrance and Communion Antiphons in the Roman Missal. Each Didgeridoo track has a suggested application – Welcome/Entrance, Preparation of Gifts/Communion reflection and Farewell/After Mass – however we encourage you to use them as per your needs during Aboriginal and Torres Strait Islander Sunday within your Parish.

An example for using this Didgeridoo music is to have a track playing as welcome music to set the scene when parishioners are arriving and being welcomed into Mass, prior to the entrance procession and Hymn. The Didgeridoo music serves to provide spiritual reflection for parishioners on Aboriginal and Torres Strait Islander Sunday at the following points: 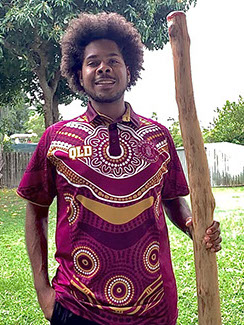 My name is Luke Stevens and I am a proud Kuku Yalanji and Yidinji man from Cairns, Far North Queensland. As a young Indigenous Catholic man, my faith has taken me on a journey where I have enjoyed finding unique ways to sharing faith with others. 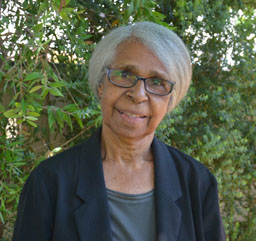 Written and performed by our very own Torres Strait Islands Councillor Dolly McGaughey,  these beautiful hymns evoke the spirit of the Islands.

The Roman Catholic Church began its ministries in the Torres Strait when Pope Leo XIII requested that the Sacred Heart Fathers establish a Mission in New Guinea. It was decided among the Fathers that the setting up and servicing of such a Mission would be better facilitated if a site was chosen in the Torres Strait. Parishes are now established at (Sacred Heart) Thursday Island, (Holy Family) Horn island, (St Joseph the Worker's Church) Hammond Island and (St Stephen's) Bamaga.

Developed at the 1995 NATSICC Leadership Gathering, this prayer maintains its relevance to this day.

Our Australian Catholic Bishops have walked alongside NATSICC for over 30 years and continue to do so today. We work closely with our own Bishops Commission - the Bishops Commission for Relations with Aboriginal and Torres Strait Islander Peoples -  our goal being to share our gift of Spirituality with the wider Catholic Church and have those gifts fully embraced.

The videos below were filmed in 2020, but still contain a very special message for the Australian Catholic Church

This year the National Aboriginal and Torres Strait Islander Catholic Council have adopted the NAIDOC theme for Aboriginal and Torres Strait Islander Sunday – Heal Country. In Laudato Si’, Pope Francis has called us to continue to seek greater protections for our lands, our waters, our sacred sites and our cultural heritage from exploitation, desecration, and destruction.

Today’s Gospel is very fitting because Mark tells us of Jesus returning to his ‘native place’ – Nazareth – to a non-accepting, hostile reaction. Jesus had been welcomed and revered in other places, why is it that he is mocked and disregarded in his own home? “Is he not the carpenter?” the crowd called because they saw him as “without honour” and were unable to believe in him. He did not fit into their ideological view and thus did not deserve respect in their eyes.

In Australia, our own First Nations people have suffered a similar reception to Jesus in Nazareth. Their knowledge and complex cultural systems, created and honed over millennia, are often dismissed as primitive and irrelevant to our fast-paced world of today. This could not be further from the truth, particularly as we become more aware of their continued care, love, and respect for ‘country’, grounded in a relationship with the creator that formed independently of Western influence.

2021 marks the 250th Anniversary of the arrival of Christianity in Australia. Yet the Spirit of God was poured out onto the original inhabitants of this great Southern Land many, many thousands of years prior. God’s Spirit could be heard through the singing of the birds, the cascade of the waterfall, the rustle of the wind and, most importantly, in silence.

Miriam-Rose Ungunmerr-Baumann, a respected Ngangiwumirr Elder, artist and 2021 Senior Australian of the year explains the importance of listening and understanding the silence:

“My people today, recognise and experience in this quietness, the great Life-Giving Spirit, the Father of us all. It is easy for me to experience God’s presence. When I am out hunting, when I am in the bush, among the trees, on a hill or by a billabong; these are the times when I can simply be in God’s presence. My people have been so aware of Nature. It is natural that we will feel close to the Creator.”

Aboriginal and Torres Strait Islander peoples are inextricably connected to country in Australia and its waters. This connection to country and all of God’s creation is core to their spirituality as a people and that of their ancestors. The term itself – Country – encompasses far more than the physical land. “For us, Country is a word for all the values, places, resources, stories and cultural obligations associated with that area and its features. It describes the entirety of our ancestral domains.” explains Professor Mick Dodson.

“We like the way he uses the things of nature to teach, and the important part nature plays in the Sacraments”

Deacon Boniface specifically mentions sacraments, because to Aboriginal and Torres Strait Islander Peoples, all elements of life are sacramental. The gifts of God are evident and intertwined into every aspect of life, not just on Sundays, or when convenient. First Australian’s are called to be stewards of creation, to care for and watch over their gift, and this responsibility is intrinsic to their belief systems. Many Language groups assign a Totem (a natural object, plant or animal) to a child at birth. This totem defines the responsibility of care between individuals and with creation itself. It is intrinsic and it is core to their survival and relationships.

For Catholics, the Eucharist itself is a foundational sacramental reality in which natural elements—grain and grapes—symbolize not only our lives but also Jesus’ farewell meal and his presence today. In those natural elements and through the Eucharistic prayer, Christ is truly present to us. These elements display the abundance provided by the Creator to sustain us, both physically and spiritually. It is a very natural and familiar ‘ritual’ to First Nations Peoples because it combines the elements of life with a greater being. It brings all aspects of life together.

Because of the connection that Aboriginal and Torres Strait Islander people recognise between country, faith and the wellbeing, it is no surprise that when the world is in pain, Australia’s First Peoples are in pain. During the COVID 19 Pandemic, many of the trappings of Western life became impossible. The rivers were calm and clear from the absence of boats, the cities were quiet and still as restrictions took hold. We saw images of animals returning to previous habitats, and the smog clearing from above cities across the world as our common home took a ‘breath’ from our constant consumerism and drive for development.

On this special Sunday, a day where Aboriginal and Torres Strait Islander and non-indigenous Catholics come together and sit side by side (adhering to COVID restrictions of course!), we should acknowledge that we are united in a fight to save God’s creation. It is one we cannot fight alone. We must combine the knowledge of First Australians with the technology borne of Western culture to ensure that future generations shall have the opportunity to experience the gifts of God’s creation as intended.

Again, today’s Gospel also speaks of the need for faith and acceptance to enable gifts to be shared. Mark says “So he was not able to perform any mighty deed there, apart from curing a few sick people by laying his hands on them.” Without faith, Jesus knew his miracles would not be accepted as such. This teaches us that we must have trust and faith to truly accept the wonders of God.

To sit, talk, and listen is the first step towards acceptance and understanding. Aboriginal and Torres Strait Islander people have longed to share their knowledge and wisdom about the seasons, animals, and flora, but until we, as a society and a country are receptive, their contribution goes unappreciated and unutilised.

The more we share with each other, the more we realise that as humans, we have more similarities than differences. The differences between our cultures should not be seen as weaknesses, for they can also be where our strengths lie. Embracing these differences is an aspect of inculturation. Christian faith must find appropriate expression in each culture—that is what is meant by inculturation. Pope Francis, in his exhortation Beloved Amazonia says:

“Inculturation elevates and fulfills. Certainly, we should esteem the indigenous mysticism that sees the interconnection and interdependence of the whole of creation, the mysticism of gratuitousness that loves life as a gift, the mysticism of a sacred wonder before nature and all its forms of life.”

Let us move forwards as a united people in Christ, committed to embracing the gifts of Aboriginal and Torres Strait Islander knowledge to not only Heal Country, but to Heal our relationships with one another, and in doing so our creators’ gifts to us all – this world.

A page that shares NATSICC's points of view on various important topics, including the Environment, the Indigenous Voice to Parliament and more. 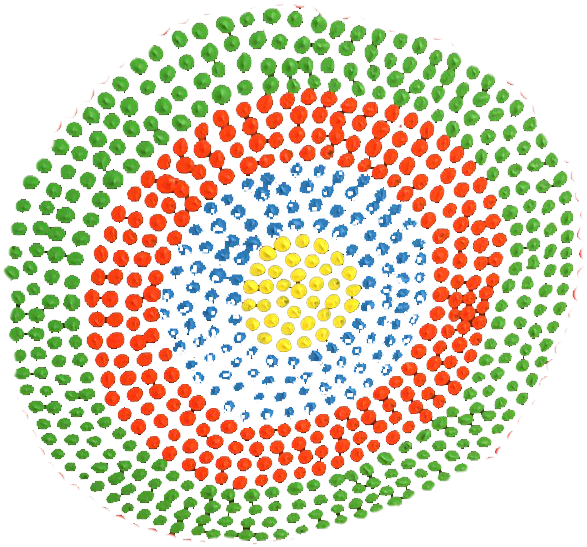